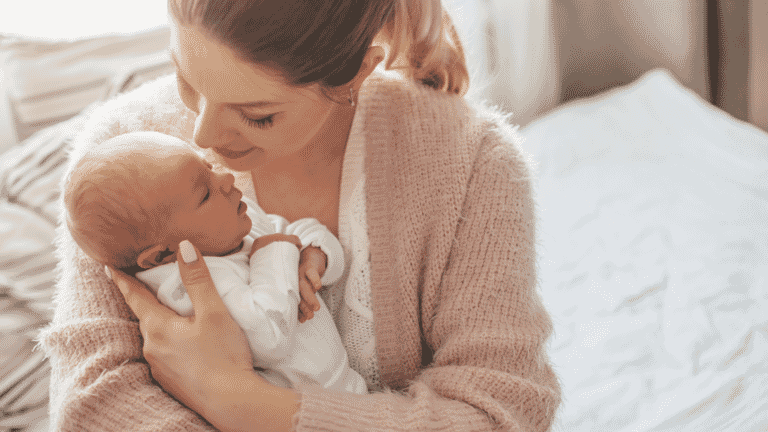 You’ve probably done lots of research about labor and delivery, but you might not know so much about what happens to your body right after the baby arrives. I wrote it down for you!

The first 6 weeks after giving birth we call puerperium. The definition of Puerperium is the time immediately after the delivery of a baby.

Early puerperium lasts from the day of birth to the 10th day after giving birth. During it labor wounds heal, milk production begins and stabilizes. During this period the mother lives in the closest connection with her baby and it is not possible to divide them. It is the most beautiful kind of love. Puerperium ends after about six to eight weeks. Mom adapts to life with the baby, they create a common daily routine.

What’s happening in the time of puerperium?

During this time, the birth injury heals, the hormones gradually calm down, and the woman’s body returns to normal after nine months of pregnancy.

How does a woman’s body change during this time?

During the sixth week, there is total healing in the female body and a period of change occurs. Gradually, the uterus shrinks. Therefore, some mothers may experience pain like contractions in the first days after giving birth.

The cervix also returns to its original state, and the abdominal muscles and pelvic area are strengthened again.

The milk begins to produce, these hormones also contribute to the emotional lability that most mothers suffer. During the sixth-week women are more sensitive or crying, and about half of the mothers have postpartum depression (3-4 days after giving birth), but it usually disappear within fourteen days.

If postpartum depression does not stop it can lead to rare psychosis. The woman becomes dangerous to herself and her surroundings and mainly to the baby. In this case, it is necessary to seek professional help as soon as possible.

During the first six to eight weeks after birth, the uterus heals and regenerates. The female body gradually tries to eliminate blood clots, placental remnants and all other unnecessary substances. For this reason, bleeding occurs in the puerperium, which is also called purges.

However, some women bleed throughout the whole puerperium – and it’s normal.

Doctors recommend the use of strong sanitary pads in the first days after delivery, while once the bleeding has calmed down a bit, you can use the ordinary panty liners. Tampons and menstrual cups, on the other hand, are completely forbidden for the whole six weeks, because there is a high risk of infection.

The first six week after giving birth is really not the right time to start working hard on your body. Enjoy your baby at home. Besides that, you are going to be really tired your abdominal wall needs some time to regenerate. Rather than jumping in the gym or swimming which is not recommended in the puerperium, do exercise aimed at regenerating and strengthening your amazing body.

Returning to sex life can be challenging and is often accompanied by embarrassment on both sides. Due to bleeding and the need for healing, doctors recommend sexual abstinence in the first weeks after giving birth, but the time required for healing may be different for each woman. It is usually recommended to wait at least 4-6 weeks to prevent infection.

Infection of the uterus can also be one of the causes of bleeding in the puerperium. This health complication is manifested by fever, heavy bleeding and great tiredness. It is important to see a doctor immediately – prescribe antibiotics.

The following complications may be:

What should you do during puerperium?

All new mothers are instructed after giving birth that they should pay increased attention to personal hygiene during the sixth week. In addition, doctors recommend avoiding excessive physical and psychical activities.

Enjoy the puerperium time in peace with your baby and rest enough so that your amazing body can regenerate properly.

Check out also these tips