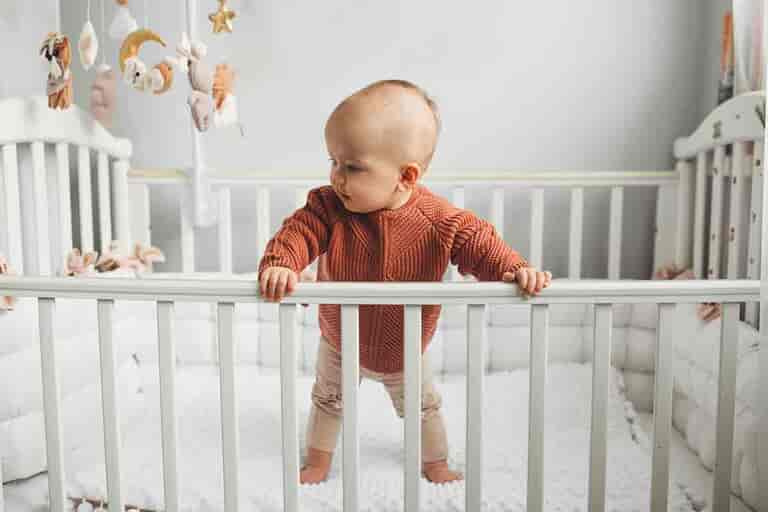 According to the American Academy of Pediatrics (AAP), babies should sleep in a bassinet in their parent’s room for the first six months. This has since been considered a general rule.

Babies eventually outgrow bassinets. As a parent, you must know when this happens so you can move your baby to a crib.

Here’s how you know your baby is too big for a bassinet.

When is Baby Too Big for Bassinet?

The following are different indications that your baby has become too big for a bassinet and is ready for a crib.

When Your Baby Starts Rolling Over or Moving Around A Lot

According to the American Academy of Pediatrics (AAP):

Parents must stop using bassinets for their babies the moment they start rolling over. The rationale for this recommendation is simple—to prevent accidental suffocation and to topple over.

You must know how bassinets work. Despite being very comfortable, they are much smaller than cribs and offer just a little space for babies.

Thus, babies rolling over pose a health risk as bassinets don’t have sufficient space. They may inadvertently roll to a position that makes breathing difficult.

Although most new bassinets have breathable mesh on the side, this may not be enough sometimes.

Babies have poor neck control. This means they cannot reposition their heads when they roll over to a bad position.

If this happens at midnight when no one is awake to reposition the baby, it may lead to accidental suffocation.

Cribs provide more space and make it easier for your baby to roll back and forth.

In addition to suffocating:

Babies can topple over their bassinet when they roll, as they are lightweight. Also, if you notice your baby moving around a lot, especially during sleep, it’s craving for more space.

Thus must be transitioned from a bassinet to a crib.

When Your Baby has Surpassed the Weight Limit

Every bassinet has a maximum weight limit that typically ranges between 20 and 25 lbs. There are also a few that can be as low as 10 lbs or even as high as 30 lbs.

So, you must check your baby’s weight regularly to ensure they’re still below the weight limit. If you find that your baby has crossed the limit, do not hesitate to upgrade to a crib.

The bassinet may become unstable when it’s overloading causing your baby to wobble or fall over.

When Your Baby has Surpassed the Height Limit

Bassinets are designed to contain babies even when they’re fully outstretched. In other words, neither their heads nor feet should touch the bottom and top edges of the bassinet.

Babies grow rapidly, with some even more rapidly than others. This means that they outgrow the bassinet a few months after usage.

Consequently, they won’t have enough space to stretch out and may wake up uncomfortable. They may also wake up more often than normal.

If you notice your baby’s head and feet touching the bassinet’s edges, it’s time to move your baby to a crib.

When Your Baby Starts Sitting, Standing, and Crawling

Sitting, standing, and crawling are some of the most anticipated milestones of babies. When your baby reaches these milestones, it’s no longer a good idea to continue with a bassinet.

Unlike cribs, bassinets have low walls. Therefore, it’s easy for babies to fall off when they look over the edge while sitting or standing.

Also, crawling babies can easily get out of the bassinet and hurt themselves.

A bassinet is great for newborns and is recommended by the American Academy of Pediatrics (AAP), but when does your baby become too big for a bassinet?

Here are the signs to watch out for:

If you notice these signs, it’s safe to say that your baby’s time in the bassinet has ended.

Remember to reach us via the comment section if you have further questions.

What is a Bassinet Weight Limit?

How Do You Know When Babies are Too Big for Their Bassinet?

Several things indicate that babies have become too big for their bassinet. This includes if they weigh over the bassinet’s weight limit and are taller than the height limit.

Also, they’re too big for the bassinet when rolling, sitting, standing, crawling, and moving around.

It’s a fact: A safe sleep environment is crucial for newborns and infants.  While there are many things you can do to ensure your baby is safe during sleep. It’s important to understand where should newborn...

As a parent, you know how fragile a baby is. Baby needs to be handled with care and monitored closely at all times.  Hence: As a parent, you have to make sure you are doing everything in your power to keep your...

It’s fact: The number of child deaths during sleep has significantly decreased since 1990 when the recommendation to place babies on their backs was introduced. That said: It is also recommended to keep blankets,...